THINGS I’VE LEARNED SINCE I KNEW IT ALL

In case you missed it, here are a couple of items that have appeared recently:

The Left Behinds Book#2: “Abe Lincoln And The Selfie That Saved The Union!”

So excited!  On January 12 Book#2 in The Left Behinds series will be in bookstores everywhere!  The title is “Abe Lincoln And The Selfie That Saved The Union” – this time the gang meets President Lincoln, Mrs. Lincoln, and their young son Tad!  But they can’t stay too long at The White House, because just 90 miles away the epic battle of The Civil War is just beginning – in the little town of Gettysburg, PA!  Mel, Bev, and Brandon are going to have to make sure that what’s supposed to happen does happen – or otherwise the entire future of the good ol’ USA will be changed forever!

Very happy to announce Book#2 in The Left Behinds series: “Abe Lincoln And The Selfie That Saved The Union!”  Available for preorder here.  Check out great cover art by CF Payne: 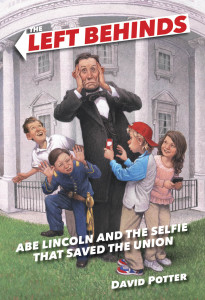 Super excited to be attending the Princeton Children’s Book Festival on Saturday, September 19.  Stop by and say hello!

Taxes, The Tea Party, and The Whiskey Rebellion: Part Two

So: the excise tax is duly passed in 1791, in exact accordance with the rules laid down in the brand-spanking new US Constitution.  As each state has elected representatives in both houses of Congress, no one can claim that there was taxation without representation.  End of story, right?

Perhaps it would help to look at this from two distinct points of view.  Each point of view has, not surprisingly, pretty much continued to this day – all you need do is turn on your favorite cable news channel and you will see what I mean.

First, let’s look at this from the settlers POV.  Western Pennsylvania at this time in our nation’s history was a region unto itself.  The folks who settled there were not wealthy – far from it.  The Allegheny Mountains lay between this area and Philadelphia, which made travel and communication slow and difficult; to the west, Native American country.  These Native Americans – the Iroquois, the Shawnee, and the Miami tribes, among others – were not mere passive bystanders.  There were continual raids, slaughters, and atrocities committed on both sides as part of a bitter, brutal fight for control of the land.  The tribes were trying to regain what they had lost; the settlers were trying to hold on to their homesteads. END_OF_DOCUMENT_TOKEN_TO_BE_REPLACED

The other night I attended the monthly meeting of my local school board – I donated a few copies of “The Left Behinds” to the elementary and middle school libraries.   I was intending to present my donations to the board, get my picture taken with the Superintendent of Schools and the president of the Board of Education, and then be on my merry way.

But I decided to stay.

The name of the school where the meeting was held, you see, happens to be Bear Tavern Elementary School.  Which logically enough is on the Bear Tavern Road.

The very same Bear Tavern Road where George Washington and his men marched down Christmas night, 1776, on their way to battle the Hessians at Trenton.  About a mile down the road is Jacobs Creek, which the troops had to cross – on foot.  The creek was icy.  The men were cold and miserable. And the fate of the Revolution hung in the balance.

They prevailed, of course.  We live in the country created as a result.  And 239 years later, we citizens not only have a vote – we have a say.

As it happens, a number of citizens attended the Board meeting that night – there was a hot issue on the table and they wanted their voices heard.

Citizen after citizen came up to speak.  Each person spoke eloquently, passionately.   The members of the Board of Ed – elected by their fellow citizens, and unpaid for the countless hours they devote to the school district – listened with attention and respect.

The issue in question will have to be resolved over the next few months by the Board and the citizens of the community – no one else can solve it, or will.  It’s up to us – we the people, if you will.

The whole evening was a stirring reminder of what government of and by the people really means.  I could almost hear the foot stomps of Washington’s men marching along the Bear Tavern Road, just outside the school.   I think they would have shouted out a great big “huzzah!”

Why I wrote “The Left Behinds: The iPhone That Saved George Washington.”

Recently I’ve been asked what inspired me to write “The Left Behinds: The iPhone That Saved George Washington.”  Well, I live in the very town that Washington and his men crossed over to back in 1776, and every Christmas Day there is an annual reenactment of this historic event.  Thousands gather to watch; everyone cheers when the reenactors, dressed as Revolutionary War soldiers, row across the Delaware.  The festive event is great fun for kids, who get to run around after opening all their Christmas gifts that morning.  But I wondered: what would it be like for these kids if one day they found themselves in 1776?  How would they handle no cell phone service, for example?  Could they cope without internet, tv, indoor hot showers?  And would they have what it takes if they were called upon to help the real General George Washington lead his troops to victory at Trenton?

So from that an idea was born.  Of course, the next task was to write a fun read for kids that is both engaging and interesting – whether I succeeded or not is for others to judge, but I sure enjoyed writing it! 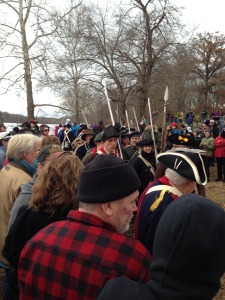 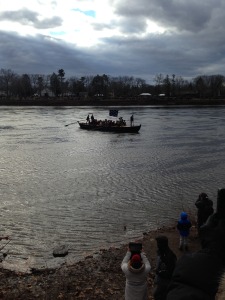 Taxes, The Tea Party, and The Whiskey Rebellion: Part One

If you want to understand America, I suggest a good place to start is Western Pennsylvania.

One thing will become “perfectly clear,” to quote  former president Richard Nixon: folks really don’t like to pay taxes.  This isn’t a big newsflash, of course, but it’s not just today’s Tea Partiers or the original Boston Tea Partiers of  1773 who don’t like to pay taxes: it’s pretty much everyone, everywhere, since humankind began organizing themselves – or were organized into – political structures.

Pharaoh, Emperor, King, Parliament, Congress: all need gold , or bushels of wheat, or the coin of the realm, in order to operate.  And one way or another, they find ways to get it.

There are references to taxation in the Bible: “But when the crop comes in, give a fifth of it to Pharaoh. The other four-fifths you may keep as seed for the fields and as food for yourselves and your households and your children.” (Genesis 47, v.24).  That would be a 20% tax, by the way.

The Persians taxed. The Indians and the Chinese taxed.  The Romans and the Ottomans taxed.  And wherever there was taxation, there  was also resistance, cheating, skimming, hiding, protesting, and sometimes rebellion. END_OF_DOCUMENT_TOKEN_TO_BE_REPLACED

The A Team: Washington And Hamilton

George Washington and Alexander Hamilton get no respect.

Sure, one is on on the dollar bill, and the other is on the ten dollar bill, but when I hear folks talk about the “original intentions” of our Founding Fathers, rarely are Washington or Hamilton mentioned first.

As I see it, we are living in the nation George and Alexander envisioned.

Notice I use the word “nation.”  For despite our name – “The United States” – we are most definitely a single nation.

Washington and Hamilton established this single nation.  They give it its foundation.  They nurtured it.  And all that they did has endured to this day.

George Washington and Alexander Hamilton were the A Team of the Founding Fathers. Everyone else was either on the B team or, in the case of Jefferson and Madison, actively in the way. END_OF_DOCUMENT_TOKEN_TO_BE_REPLACED

We The (Contentious) People

If Fox News had been around during the debate on the Constitution – the original debate, that is, in the late 1780’s – whose side would they be on?

This is a legit question, not a cheap shot at Fox News.  Because today’s anti-Big Government voices sound very much like yesterday’s anti-Federalists.

Anti-Federalists were opposed to the new constitution, and made their views known loudly and clearly.  The media of the time were broadsheets, and the method of choice was adapting the name of a well-know republican.

That would be a republican from Rome.  Cato was one such nom de guerre.  Brutus was another.  END_OF_DOCUMENT_TOKEN_TO_BE_REPLACED

ABE LINCOLN AND THE SELFIE THAT SAVED THE UNION

THE iPHONE THAT SAVED GEORGE WASHINGTON