THINGS I’VE LEARNED SINCE I KNEW IT ALL

The other night I attended the monthly meeting of my local school board – I donated a few copies of “The Left Behinds” to the elementary and middle school libraries.   I was intending to present my donations to the board, get my picture taken with the Superintendent of Schools and the president of the Board of Education, and then be on my merry way.

But I decided to stay.

The name of the school where the meeting was held, you see, happens to be Bear Tavern Elementary School.  Which logically enough is on the Bear Tavern Road.

The very same Bear Tavern Road where George Washington and his men marched down Christmas night, 1776, on their way to battle the Hessians at Trenton.  About a mile down the road is Jacobs Creek, which the troops had to cross – on foot.  The creek was icy.  The men were cold and miserable. And the fate of the Revolution hung in the balance.

They prevailed, of course.  We live in the country created as a result.  And 239 years later, we citizens not only have a vote – we have a say. 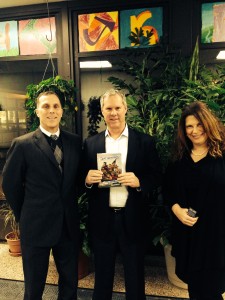 As it happens, a number of citizens attended the Board meeting that night – there was a hot issue on the table and they wanted their voices heard.

Citizen after citizen came up to speak.  Each person spoke eloquently, passionately.   The members of the Board of Ed – elected by their fellow citizens, and unpaid for the countless hours they devote to the school district – listened with attention and respect.

The issue in question will have to be resolved over the next few months by the Board and the citizens of the community – no one else can solve it, or will.  It’s up to us – we the people, if you will.

The whole evening was a stirring reminder of what government of and by the people really means.  I could almost hear the foot stomps of Washington’s men marching along the Bear Tavern Road, just outside the school.   I think they would have shouted out a great big “huzzah!”

« Why I wrote “The Left Behinds: The iPhone That Saved George Washington.”
Taxes, The Tea Party, and The Whiskey Rebellion: Part Two »

One response to “Democracy In Action”

ABE LINCOLN AND THE SELFIE THAT SAVED THE UNION

THE iPHONE THAT SAVED GEORGE WASHINGTON